The story of Easy Elsie and its mission in 1944 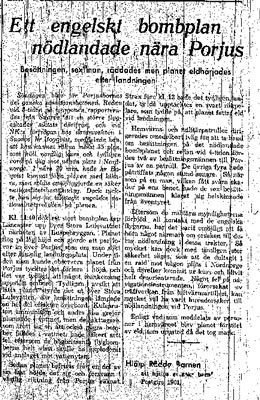 A Lancaster bomber known as NF-920 was delivered August 12, 1944 to the RAF and the 617th Squadron at Lossiemouth, Scotland. The Lancaster had been manufactured by the Austin Motor Company in Longbridge, Birmingham. It was then named the KC-E and the crew christened the plane to "Easy Elsie". The crew consisted of the following individuals.

The 29th October 1944 at 01:00 started 37 aircraft from the 6th and the 617th Squadron in Lossiemouth. They flew in formation in over Sweden in the protection of mountain massifs that would protect them from discovery. Their mission was to blow up the German battleship Tirpitz which was anchored in the Norwegian Tromso fjord.

Swedish soldiers discovered the formation, and reported to the flight command, the Swedish airspace had been violated by foreign bombers.

When the bombers came in over Tromso Fjord, where Tirpitz was anchored, the battleship was covered by heavy clouds at low altitude. The only thing that was seen was the light from anti-aircraft guns fired by the Germans'  defence.

During the attack Easy Elsie where struck by shrapnel from anti-aircraft guns. One engine was out and it dropped even hydraulics. Even the radio equipment had been damaged during the bombardment. After the attack, all the aircraft to turn back home, but Easy Elsie was again fired upon by German anti-aircraft gun fire and they lost another engine, but even more fuel.

The damage to the hydraulics allowed the bomb doors and landing gear went out, and could not be inserted again. This meant a large air resistance on the plane that was difficult to fly, while had lost two of the engines due to flak.

The radio was also hit and damaged so the wireless operator Arthur. E. Young could not communicate with the other Lancaster’s or the  base in  Lossiemouth. They could not communicate about where they would fly and how injured they were.  Later on the “Easy Elsie” was reported MIA when the rest of the squadron came safely back to base

Flight engineer Leslie Frank could see that they would never make it back to base in Lossiemouth because of the damage on the aircraft.  The pilot Daniel Carey reflected on various options after a discussion with his navigator Alexander. McKie, and concluded that the only thing that could save them was to try to steer the plane to Sweden, which was a neutral country, which would help them get back home to England again.

There was damage on the navigation equipment. Navigator Alexander McKie found it difficult to orient where they was, but suddenly Carey saw houses and buildings in a small community that would prove to be Porjus.

Carey circled around a few times over society.  While he was looking for a suitable place to land, so the crew threw out all loose and heavy There were arms and ammunition and ancillary equipment.  Anything, just to make the plane lighter for emergency landing. But now it was in a
hurry!  There was almost no fuel left and it flew in principle on fumes. 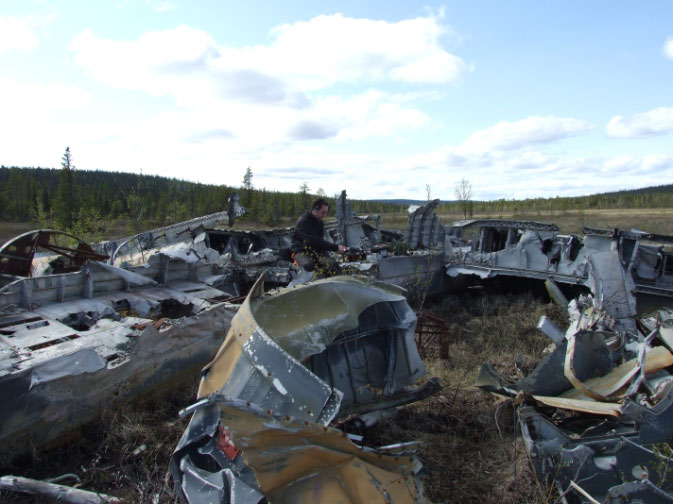 Pilot Carey thought he found a perfect spot to land on. What he did not then know was that the place was a soggy bog. Carey ordered the crew to take positions in the back of the plane before the emergency landing. The landing was not quite what Carey had anticipated. With a big "bang" Easy Elsie struck down in the mire. With the bomb doors open and the landing gear out, there so cut the plane down into the swamp, and stood on its nose, but fell back and stopped.

Everyone was quite dazed by the brutal landing, but the crew escaped without major injuries. The only person injured, was pilot Carey. He hurt his knee quite badly in the instrumentation at the landing. It is now the 29th October 1944, and the time is 11:50 in the morning. This is the end of Easy Elsie´s last flight, Out on the marsh outside Porjus.

The crew was now doing what they had learned to do. Destroy all documents and maps with mission data. Since nothing of value could come into enemy hands, or any other foreign power.. The crew set fire to the planet with little fuel remaining, and the plane was burning out of the cockpit to cargo bay.,

The crash landing had been observed by some Swedish soldiers who after a while later found the crash site and the crew out on the bog, taking shelter on a little hill up in a forest.

Carey had injured his knee hard at the emergency landing.So it was hard for him to go.Some Swedish soldiers carried him on a stretcher through the difficult terrain.  Carey was taken with ambulance to the infirmary in Jokkmokk. The rest of the crew were taken care of, and was reviewed by paramedics before being passed on to Jokkmokk. There, they served them hot food and drink by the Swedish military..
The aircraft "Easy Elsie" was taken care of by the Swedish Air Force (F21).

They made an inspection of the plane and found that the plane had burned from the cockpit to the cargo space.  The engines were collected and later sent to England.  Other equipment was collected and sent to Stockholm,  Among other radio equipment, and some navigational equipment.

Crew came back to England in the beginning of November 1944. 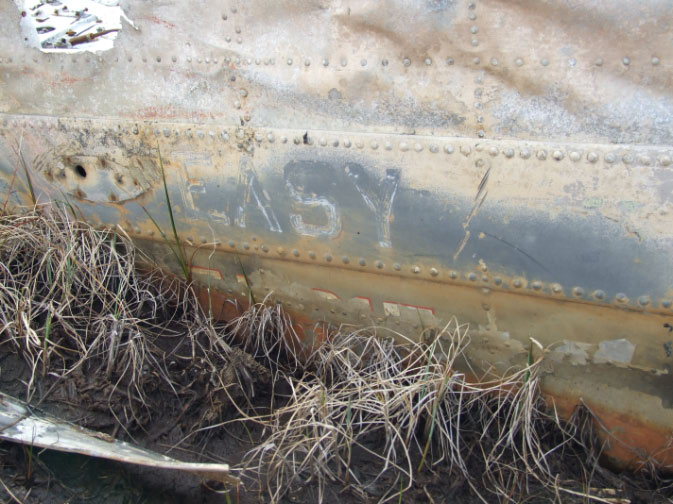 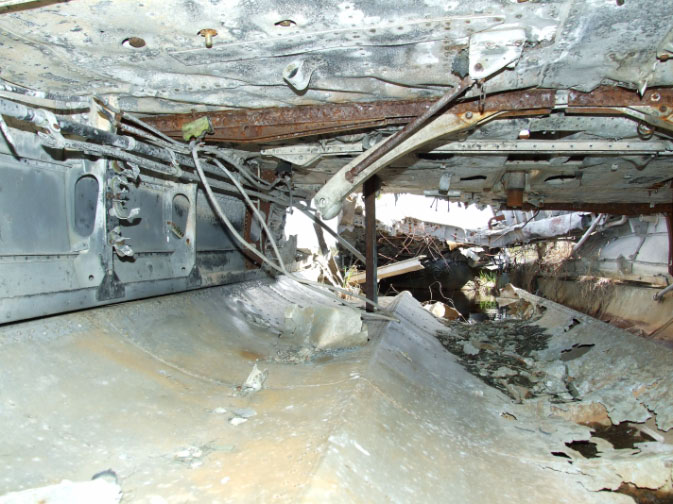 The aircraft parts that Swedish Air Force did not take care of in connection with the crash investigation in 1944, still remains at the site of the crash. It had to lie untouched until 1985, when the Swedish Air Force Museum in Linköping took care of the tail of the plane, but later was back on the site 1993. The same year that the pilot Daniel Carey's wife and her son, daughter in law and grandson visited the wreck.
Carey died unfortunately in a road accident in 1979 in Australia. But all his stories from the time of the WWII, his service in RAF and the incident with Easy Elsie, made that they wanted to make a visit to the place which Carey talked about so much, and his experience of being in Sweden.

The last of the crew to visit Easy Elsie was the navigator Alexander (Alex) McKie . When he turned 80, he got a birthday present of his sons, a trip to Sweden and Porjus, to return and to see the airplane he had navigated to Sweden, the 29th October 1944.
It was a very emotional meeting for the navigator Alexander McKie to meet Easy Elsie one last time. The visit was made on 26 June 2002
“Alex” McKie was at this time the only member of the crew who were alive. He died a few years later at the age of 86 years, August 1, 2008.

The visit at Easy Elsie

There are a lot more to read this and this was just a rough summary of what happened.
Read the document available for download in PDF format under " documentation “
Sorry, but the document are in Swedish only.

Since I am very interested in military history and events from WWII this was an exciting visit to make up at Lancaster Easy Elsie the 5th June 2011. When I was there for the first time and to my knowledge, the first one ever, to broadcast on short wave radio from operator's position since 1944. It was really fun. Unfortunately, the propagation of the day is not the best, so there were very few QSOs.

But now I have got together a crew and we are hoping for good weather and good conditioning to work shortwave radio from Easy Elsie.
16th to 17th June was chosen because it is the weekend to run MOTA (Museums On The Air). We hope to make contact with so many British stations as possible during that time.  But even with members from RAFARS (Royal Air Force Amateur Radio Society)

So it suits us very well to try to make contact with various air bases and museums across the UK this weekend.  And I think it might be interesting for them to get in touch with us as we broadcast from their missing Lancaster bomber.

Easy Elise is indeed the only aircraft in the world that remains at the place she now lies.  All other crashed planes has been taken back to England.  So I can recommend that if you are interested in aviation or interested in military history to go up and take a look at the plane.  A piece of history will remain on the marsh outside Porjus.

Follow us over the weekend by looking at the web site.  We will try to broadcast live video if possible.  We will post pictures and other things.
You can also try to listen to us or why not contact us!

See you out on the short wave bands!